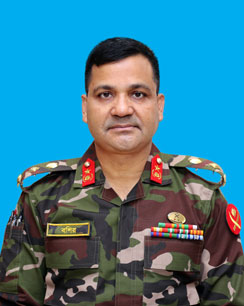 He joined in Bangladesh Military Academy in 1988 and was commissioned in the Army on 22 Dec 1989 in the Corps of Engineers. After joining in Bangladesh Army, he served at various units, formations and institutions of Bangladesh Army in various command, staff and instructional appointments. He passed B.Sc Engineering (Civil) from National University of Science & Technology (NUST), Pakistan in 1996. He served in UN Mission in Sierra Leone (UNAMSIL) and Sudan (UNMIS). At present, he is serving as the Chief Engineer in the Health Engineering Department (HED) from 09 March 2021.

Brigadier General Bashir is a graduate from Defense Services Command & Staff College Mirpur. He is also a graduate of National Defence College, Mirpur. He possesses MDS and MSSS from National University of Bangladesh and Bangladesh University of Professionals (BUP) respectively. He took part in various Courses/Training/Seminars in abroad as well as courses in various institutions in Bangladesh Army. His mentionable courses in the Army are OW, BCC, OBC, CIIC, JC&SC, ECCC, MSC, Army Staff Course, UN Human Rights Course and DP Course.